I don't blog much these days. But you didn't think I could ignore Halloween did you? A quick search on the word 'Halloween' on my blog turns up 22 posts (?!), including this one (2015), my first one (2012) and my Halloween poem - so it's no secret I love Halloween.


Last year Trick or Treating was a bit of a fizzer in our neighbourhood, but all the kids had fun and afterwards everyone ended up at our house where we served impromptu chicken nuggets and soft drink and nibbles and wine for the parents, and I got the idea in my head, I am going to host an annual Halloween party!

So this year we held our first one. I already decorate our house every Halloween but I knew we needed to up our game if I wanted to become the Halloween beacon-house of the neighbourhood (which I do, obviously).


So I bought a whole lot of stuff to turn our house into a party house and trick-or-treater bait.

I got Murderous Chef costumes for Yanni and me to wear - which were not quite as scary as this one but you get the idea: 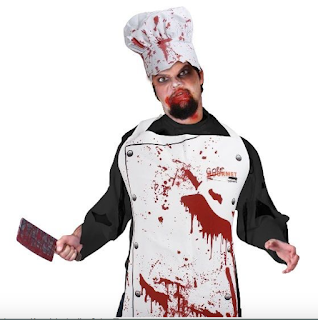 I downloaded a Halloween playlist and a scary sounds app, to play when the kids arrived and whenever Trick or Treaters came to the door. (That was fun - though a little hard to co-ordinate).

And in the end the house looked pretty good, especially inside. 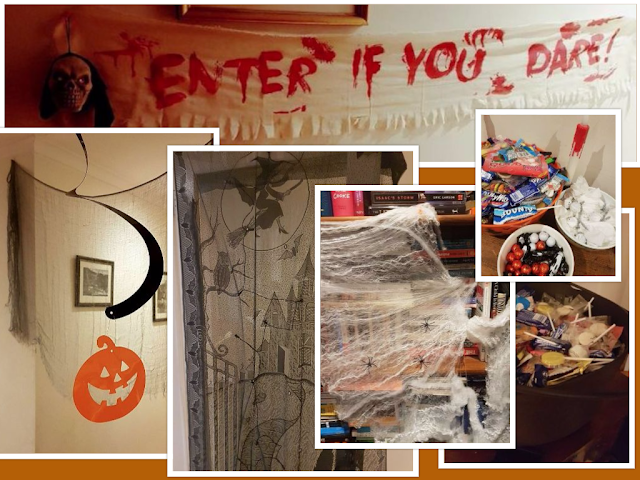 The only problem: I didn't have enough hot food for the kids. Who would have thought 18 kids coming back from half an hour's trick or treating, stuffing themselves with lollies and chocolates as they went, would be so ravenous?

We had heaps of sweet food - cupcakes, lollypop ghosts, cinnamon cookies and a cauldron full of jelly eyeballs - but not nearly enough party pies or chicken nuggets.

Thank goodness for a friend who helped us host and brought along two huge platters of cheese and kabana sausage and dips.  (Also appreciated by the murderous chefs).

And - again, who knew - hosting a party for 18 kids hopped up on sweets for two hours is exhausting! It's a lot louder, messier and more chaotic than I was probably expecting too.

But Yanni and I did have fun, and after frantic serves of drinks and hot food we were able to sit down and relax with wine and nibbles and watch 18 kids run rampant through our very own haunted house.

Plus, our party was apparently the talk of the school the next day and everyone thought it was AWESOME.