My Tips and Tricks

Now I have to warn you - I don't have much.
That's because, as I have learned, there are limits to what you can do, juggling two crying babies for example.
Accept that there are limits, accept that it is sometimes hard, and get on with whatever you need to do until the difficulty passes. (And if doing what you need to do is shutting the door and sitting crying on the floor for 20 minutes, then do it.)

Comfort the calmer baby first.
This is counter-intuitive but it is right. You will calm the less-worked-up baby quicker, and prevent her escalating to the point where you have two screaming babies (at which point, you are pretty much screwed).

Use equipment if you have it.
BEST THING EVER for me was my two simple rockers. I used these all the time and was so fervently thankful for them I don't know what I would have done without them.
They were great for settling or for popping the babies into for 'playtime' or relaxation, and you can rock them with your foot if you're busy on other things. I put them in the rockers and had them near the kitchen while I was cooking, in the bathroom while I showered, or in the loungeroom in front of a window while I showered. They were always happy in them and as they got older they could rock themselves.

When they were one and a half and sitting up in the rockers while watching TV, I had to admit to myself we had probably outgrown them.

Second best thing ever for me was a baby swing loaned to us by a lovely lady in my mother's group whose baby didn't like it (bless him!!). I swear we used that thing until M was 6 months old and the swing mechanism was groaning under her weight. By that stage I was willing to pay whatever it cost to buy a replacement if we broke it (we didn't fortunately).


Managing two screaming, really really upset babies
Fortunately this doesn't really happen very often. Mostly you will have one more upset than the other, or two crying but not both screaming and unmanageable. It does happen though.

There is no solution to this one. You just have to "choose" one baby and comfort it first, and leave the other one till next (in a safe place such as a cot of course). And yes, it's horrible. But here is where you use one piece of really useful classic wisdom that I used to chant in my head like a mantra:  "This too shall pass."

Can I just say that having taken myself and my twins to sleep school as soon as we could get in and having only really cracked the sleep thing consistently when our girls were four, I am not in a position to offer advice here. But the following bits and pieces were genuinely helpful to me.

Controlling two (or more) mobile babies while busy, or taking one at a time to the car
Use a playpen. Don't even try not to.
If I was taking one baby at a time to the car, or if I needed to go to the toilet, or if I was ironing (I believe I did do that once), I put the babies in the playpen while I was out of the room or busy with the other one. They weren't crazy about it, but it was only ever for a few minutes at a time, and was instant peace of mind. 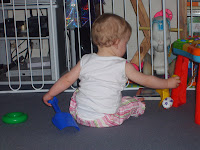 Feeding two babies: bottle feeding
One word: rockers!
I used to hold one baby in my arms and feed her, and have the other in her rocker, rocking it with my foot, while she fed. Then halfway through I'd burp the first baby and pop her in her rocker to finish feeding, then pick up the second, burp her, and finish feeding with her in my arms. So each got a turn in the rocker and in my arms. These were the times I always felt most competent and kick-arse as a twin mum.
When the babies were really little I just used to feed one at a time, in my arms.


Feeding two babies: breast-feeding
Have to say I did not rack up much experience in this so am not qualified to give advice. But you basically experiment until you find what works. You can feed one at a time but as breast feeding tends to take longer than bottle feeding, you might not be able to do this - eventually most twin mums prefer to find a way to feed both together. Sitting on a couch or propped up on a bed with lots of pillows and twins propped up is the way most go. It takes some getting used to.

Most mothers I know ended up doing a mix of breast and bottle feeding, as breast feeding twins (or more) exclusively is very difficult.

Taking twins to the supermarket
Avoid where possible. In a word, horrendous. You can have one baby in a sling and one popped in the baby seat in the trolley, or somehow manage to juggle both of them out of the car and all the way over to one of those twin baby trolleys (to this day I can't figure out how you're supposed to do that - leave babies in the car, go into supermarket, find the one trolley with two baby seats in it, and bring it back to the car?). I took my twin pram in, and limited my shopping to what could fit in a basket - but carrying a shopping basket while pushing a pram is not as easy as you may think. Factor in one or both babies crying and it is a nightmare.
Once they're too old for the pram, it's one sitting in the toddler seat in the trolley and one in the main part of the trolley, sitting on the sturdier groceries as their balance is not the best at that age.
My girls are nearly six now, and I can honestly say I have only recently not absolutely hated every second I was inside a supermarket with them. They're quite good now - but I still go on my own unless completely unavoidable.


Keeping track of feeding, medication, who had which breast, who had what solids, who did what bowel movements, etc.

Keep a diary. I had exercise books I just ruled some columns down, one double-spread page per day (one page per baby). Each day I ruled up the columns and wrote in my little heading initials, I toyed with becoming an internet mumpreneur, sourcing and selling custom-made baby diaries so that I wouldn't have to write up the columns and headings every day.
But they were very helpful and also made entertaining reading later on, when I could chuckle at my foggy panic over quite normal little variations in their day to day lives. ("A had very loose poo and looked unhappy. Sick???!")

Even keeping a diary I did suddenly realise one day that on the previous feed I had inadvertently fed one baby twice and the other not at all. No lasting effects thankfully.

Unless one of them is sick (and sometimes even then), just use one bowl and one spoon, and feed alternate mouthfuls to each. Have the odd spoonful yourself if it's an especially delicious mix of mashed veg. On the other hand, use separate bowls if you find that one is eating faster than the other and you want to make sure you don't short-change one (see paragraph above).

On solids, two great pieces of advice from Robin Barker, whose book Baby Love I adored:
(1) Don't bother freezing mash into ice cube trays, as it is a lot of trouble and they don't defrost well. Just make a big bowl of mashed veg and keep in the fridge for 4 days. This is excellent advice and I would add, to make your busy lives as easy as possible, make an extra large bowl, and each evening for dinner the parents eat a piece of barbecued or grilled meat and a big helping of the mashed veg. Delicious, easy dinners.
(2) Her avocado recipe (great simple recipes in this book the way) goes like this:
"1/2 a ripe avocado (you eat the other half mashed with garlic and lemon juice or just splash in some balsamic vinegar). Mash avocado with a fork."
I love that - love that she thinks of the mum too, with a quick and healthy pick-me-up that is also a practical way to use up all the avocado. Thanks Robin Barker!

So that's it for babies -

I will add more for older children once I've figured that part out! (Currently in progress).