I know not everyone likes Twitter, and lately I don't much like it either. It's all a bit exhausting. But there is still plenty of gold in Twitter. These are the accounts that are currently making me smile.

Showcasing the worst of the restaurant craze for serving food and drink in silly things.
The photos make me LOL.

So, so good. When you've spent a few years wrangling parenting and work AND dealing with the endless scream-worthy, useless, unfair and impossible "advice" in women's lifestyle articles, welcome to your soulmate, ManWhoHasItAll.  Turning all the stupid "work-life balance" advice for women around as if it were written for men:


Working dad? 9 easy, breezy hair styles to get you out the door in no time.
— manwhohasitall (@manwhohasitall) August 11, 2015

1 almond. 3 broccolis. 2 yoghurts. Mix together and apply to face to draw out insecurities.
— manwhohasitall (@manwhohasitall) August 12, 2015

DADS! How do you manage childcare if you work anti-social or unpredictable hours?
— manwhohasitall (@manwhohasitall) August 11, 2015

Kids in bed? Wife back on the playstation? Time to kick off your shoes, have a full glass of water and light a scented candle. 'Me time'.
— manwhohasitall (@manwhohasitall) June 16, 2015

Father who works? Not enough time in the day? Well organised dads know the secret to having more time is staying hydrated during the day.
— manwhohasitall (@manwhohasitall) June 16, 2015

I could keep going. I have retweeted so many of these I've virtually stolen the account.

I love short stories, in particular of the speculative fiction type. And I love flash fiction - when it's good (which it often is not). All last month under the hashtag #MicroLitMonth, this account put up some really great short short fiction.

Source of excellent articles which look at issues and ideas slightly differently, with the benefit of academic insight. The articles are a good length, striking just the right balance between Buzzfeed and Longform, and they publish them all under a Creative Commons license. Nice work, The Conversation.


It’s an abuse of copyright to use it to stifle creativity – even the everyday, unglamorous kinds. https://t.co/jQtwErdLR2
— The Conversation A+C (@TC_culture) August 12, 2015

The God we really need.

Cynical exploitation of internet-cute? Sure. But ADORABLE.

The politicians are saying the problem is the rules are too opaque, and they need to be made clearer. I guess they need rules where they are not tempted to push the definitions of what is allowed to the absolute limit of shameless logic-twisting, intention-denying interpretation, just because everyone else in the parliament is doing it too.

In fact all this really needs is leadership: one decent PM who will say, at the beginning of his or her term in office, "Look, let's stop all this nonsense and all agree to just claim the bare minimum, and let me set up someone whose task it will be to check what you're claiming and disallow anything that would make a reasonable person go, 'Well, that's not reeeeally what the designers of this entitlement had in mind...' "

But since we don't have that, sure, I guess we need to tighten the rules and make them "more transparent".  So fine, it's not that hard.  In fact, the existing rules are actually pretty clear, except for spelling out what is an allowable business trip.

But ok, here are my new rules:


I also think it's a good idea as someone has suggested, to rename them from 'entitlements' to 'expenses' or 'claims'. If you are told something is an 'entitlement', you are apt to claim it. Just as many taxpayers routinely put in work expense claims for the couple of hundred dollars' stationery claims you are allowed to make without receipts - and can I just add, that I also think this is appalling. Don't do it, people.

There has been unhappiness about MP entitlements before, but this time it's the current government's own harsh budget and rhetoric ("The age of entitlement is over!" - oh, I love it) combined with Hockey's out-of-touch announcements ("poor people don't drive far", "people should get a good job paying good money") combined with the usual dubious expense claims by all of them, that is bringing this to a head. 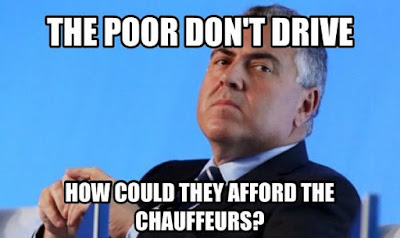 To finish off: this is the funniest Bronwyn Bishop helicopter meme in my opinion:

I Stand With Adam

I'm not a joiner, usually. I wholeheartedly support marriage equality, but I didn't rainbow my Facebook profile. There were enough of those that mine wasn't needed - and that's usually the way I feel about protests and public acts of support once they get a big enough following.

But I actually feel quite strongly about this one, and I do agree with Fairfax that this is an important turning point for our country. These days where anything public is drawn out and carried on to exhausting length thanks to social media, there is also the need to manage and direct the momentum to make sure it is carried in the right direction.

So I stand with Adam.


The attacks on Goodes in recent times have reached such a level that they are reflecting poorly on our entire nation. We all have a duty to help end this travesty – and prevent repeats – by having the courage and decency to call out such behaviour as a racist disgrace. It certainly has no place in a nation that would pride itself on being diverse, multicultural and, above all, fair.


We know now, these days, the damage to a person's psyche and future that bullying causes. We know the damage it is causing Adam Goodes. No reasonable person, surely, can still argue that constant, sustained booing doesn't do any harm. We might have thought that once. We might have believed that sportspeople have to accept this and that they tune it out. We know differently now.

Adam Goodes is a bloody legend.  He's a great footballer obviously, having won TWO Brownlow medals and kicked 454 goals; he is loyal to his club, and he's racked up an impressive amount of community work especially for young indigenous sports. He's been a big name in football and in his community for more than 20 years.

So why the hatred?

Staging for free kicks? I'm not a footy person so can't speak to this, but others have - like here (the Herald Sun!), and here and here.

Aboriginal war dances? If so, so what? Celebrating your own culture is not the same as attacking others.

Refusing to celebrate Australia Day? It's time Australians realised that the majority of indigenous Australians feel this way, and this is not news, nor is it surprising.

Using his Australian of the Year award to call for action on racism? An absolutely appropriate use of the platform I'd say.

'Bullying' a 13-year old? Hardly. Firstly, the 13-year-old had to learn that she couldn't racially vilify. She did learn that, justifiably. The humiliation and horror she felt after this incident must have been awful, but she also had plenty of love and support around her, and the public aspect was over fairly quickly. The media didn't drag it on, and Adam Goodes himself, once he knew the girl's age and accepted that she didn't know she was being racist, was reasonable. He didn't let it go - why should he? But he was not cruel, and he talked to her to help her understand.

When she called to apologise the next day, he got the word out:

Just received a phone call from a young girl apologizing for her actions. Lets support her please #racismitstopswithme #IndigenousRound
— Adam Goodes (@adamroy37) May 25, 2013


From the beginning, he emphasised the impact of her slur on him (it was 'devastating' and he was 'gutted').  Which was necessary for Australia to hear.

Check out his words after the event:

Goodes said the fan's offensive remarks had shocked him."I was just like, really? Wow could that happen?""I don't know if it's the lowest point in my career, but personally I've never been more hurt."It felt like I was in high school again being bullied. I don’t think I’ve ever been more hurt by someone calling me a name. Not just by what was said, by who it came from."


I can't know what racism feels like. I have an idea, but I can never feel the kick in the guts that Adam Goodes feels, when despite being successful, loved and respected in the community, a single racist epithet - and from a child, meaning she has learned it from the community around her - can bring it all down.

Australians overall are fair and inclusive. Most Australians now have grown up in a multicultural environment and are not overtly racist. In my years travelling I loved seeing Australians overseas interacting with people.  Australians treat everyone the same in a relaxed natural way that stood out for me observing it.

But there is an unmissable ugliness to the vitriol being pumped Adam Goodes' way, and in the anger with which people are defending their treatment of him. I understand people who don't like him and who are not racist, being angry at being made to feel racist. But you have to examine the underlying feelings and beliefs behind your reactions, especially when they are disproportionate.  Waleed Aly is right when he says that Australia likes its minorities happy, grateful and quiet - when this is the case we adore them. When they are not, we find it too confronting, and we kick back, hard.

An American caller to ABC 774 yesterday also was not in doubt. A resident here of 20 years, he found the booing racist without a doubt. I'm paraphrasing from memory here, but he said, "Australia is a wonderful society, and there is not the overt racism we have in the US, but there's something about this, what's going on now... This thing is putting me off."

#IStandWithAdam. Australia should learn from this and grow, but with no further negative impact to Adam Goodes.