Another year, another questionnaire...

This one is copied from Kath at Blurb From The Burbs, with thanks.


2. Did you keep your new year’s resolutions, and will you make more for next year?
Didn't make any last year. Will be making some this year (will post them separately).


3. Did anyone close to you give birth?
Yes! My sister had her beautiful second baby, a daughter, this month.


4. Did anyone close to you die?
Yes. My aunt passed away earlier this year, which was a shock to us all. I still can't quite believe it.


5. What countries did you visit?
Greece.


7. What dates from 2012 will remain etched upon your memory, and why?
10 June - my aunt passed away. Two days before I travelled up to the NSW Central Coast with my dad to bring my grandfather down to see her, and we didn't make it back in time. It was a very difficult time.

18 June - we arrived in Greece and I broke my arm.

8. What was your biggest achievement of the year?
Changing my job, working style and personal equilibrium (small part achievement, greater part luck).


9. What was your biggest failure?
Sorry to be boring, but failing to lose weight.


10. Did you suffer illness or injury?
Yes, I broke my arm. A bad spiral fracture in June that ended up needing surgery, and is still not fully healed.


11. What was the best thing you bought?
Time off, and tickets to Greece - both with my redundancy money.


12. Whose behaviour merited celebration?
I was very proud of A, who had a difficult year at school. Starting Grade 1 without any friends in her class, she was anxious and upset for much of the first half of the year, but gradually turned it around. I heard her a few times giving herself a pep talk or talking herself out of being sad or worried, and she learned to approach new people and join in their games. I was very, very proud of her.


13. Whose behaviour made you appalled and depressed?
Mine - couple of times while my arm was broken I cried/got tantrumy in front of the kids.


14. Where did most of your money go?
Mortgage; financing a few months off work; overseas holiday.


17. Compared to this time last year, are you: (a) happier or sadder? (b) thinner or fatter? (c) richer or poorer?
(a) Happier
(b) Fatter
(c) Poorer
What a funny correlation.


18. What do you wish you’d done more of?
Exercise


20. How will you spend New Year's Eve?
At home, in front of the TV or reading a book. Excellent!


22. What was your favourite TV program?
Homeland.


23. Do you hate anyone now that you didn’t hate this time last year?
No. Who hates?


24. What was the best book you read?
Traffic: Why we drive the way we do and what it says about us by Tom Vanderbilt. Fascinating.


25. What was your greatest musical discovery?
Adele. Yep, I know I'm a year or so behind.


27. What did you want and not get?
An extension and a spruced-up deck.


28. What was your favourite film of this year?
You know, I quite liked Salmon Fishing in the Yemen.


29. What did you do on your birthday, and how old were you?
On my actual birthday, home with Y and the kids. A few days later, dinner out with a couple of friends. Both lovely. I'm now 43. *sobs quietly*


30. What one thing made your year immeasurably more satisfying?
Part-time work.


31. How would you describe your personal fashion concept in 2012?
Expedient.


33. Which celebrity/public figure did you fancy the most?
Well, there was something about Damian Lewis in Homeland...


34. What political issue stirred you the most?
Syria. WTF.
Gay marriage. Just legalise it already.


35. Who did you miss?
My aunt. Even though we didn't see her often, I loved her and she was a big personality and I still can't believe she's gone.


36. Who was the best new person you met?
This one stumps me. I don't know. Did I not meet any new people all year? I guess it's possible.


37. Tell us a valuable life lesson you learned in 2012.
Global roaming really is very, very expensive. Set your phone to wifi only when overseas. Learned this one the hard way...


38. Quote a song lyric that sums up your year.
I love that famous song about the woman who switches to part-time work, goes to Greece and breaks her arm, learns to relax and take things slower, wishes she had more money, and watches her kids grow into pre-tweens. What's it called again...? 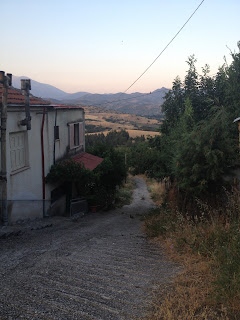 This is a good variation on the picnic dinner for fun simple meals in a hurry.

After two weeks of eating tons of junk (birthdays, Christmas, tired parents), and M having suffered a bout of gastro, we needed some healthy and simple food.

Last night Y barbecued steak before heading out to work, and it was bloody delicious. It was tender, cooked just perfectly, and marinated in Y's standard (but effective) olive oil and salt. God damn, that was one beautiful steak.  Add some quickly chopped cucumber, spring onion, feta and tomato and that was my dinner sorted. (Well, I intended to chop the salad but I actually just sat at the bench and ate the steak on its own).

I was serving plain pasta, dry toast and grated apple for M, and wanted a simple meal for A. A is not a fan of most meat and eats very little of it, especially red meat. She has never liked steak.

But why make something extra when there was perfectly amazing and delicious cooked meat right there? I decided to try her on some steak.

Now, I know all about the idea that you shouldn't pander to kids to get them to eat healthy food, shouldn't get sucked into cutting food into fun shapes, etc. Before I had kids I too scoffed at things like dinosaur pasta. 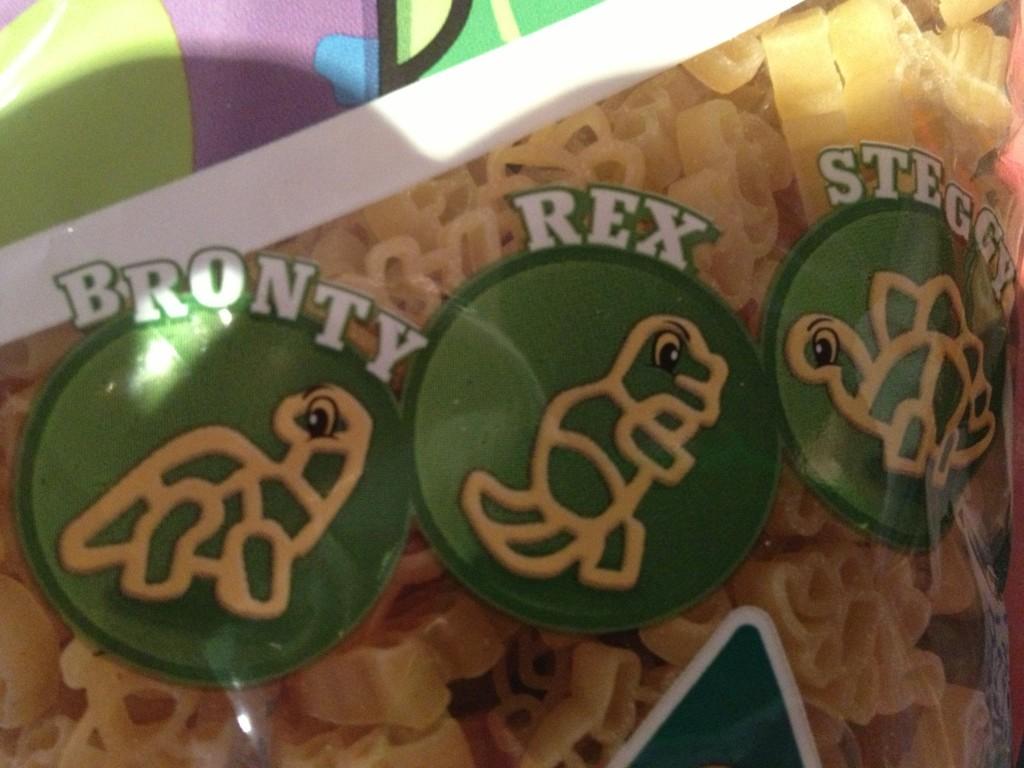 But, for a bit of fun, and to make a healthy meal easy and enjoyable, I used some dinosaur pasta and served it all up in boxes. Why not?

I found two "bento boxes" in my chaotic plastics cupboard. One was a segmented melamine tray for serving nibbles, and one was a plastic lunchbox with a smaller plastic snack box inside.

They LOVED it. Not only did their poor ravaged little bodies crave and vacuum up the simple healthy food, but the boxes were a huge hit. Both girls loved the pasta, and both hoovered up everything in their little boxes and came back for more. And A ate all her steak!

Crumbed fish fillets from the freezer, cooked in the oven.
Y made tomato, spring onion and cucumber salad.
I boiled up dino pasta and chopped up carrots, feta, extra tomato without salad dressing, and apple.

Everything went on the table. Y and I ate from shared plates of fish and salad, M ate her sliced tomato and A ate her feta, and the girls also ate from their "bento boxes":  cut up fish, dinosaur pasta, cut up raw carrot, and chopped apple.

Success and happiness, two nights in a row! 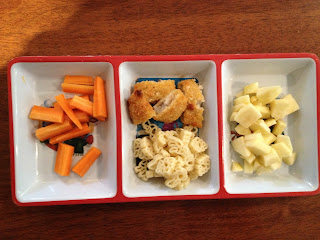 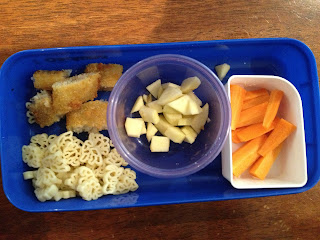 Posted by Jackie K No comments:

To All a Good Night

It seems a little pointless posting something right on Christmas Eve when I've not touched my computer or looked at my blog in three weeks. But I didn't want to let Christmas go by without a quick simple post wishing everyone a lovely Christmas.  Whatever you are doing, I hope it is joyful, or at least not too stressful, depressing, disappointing, lonely or sad (as Christmas can be).

I had pre-Christmas things I planned to write - jaunty, faux-stress complaints about shopping for presents, and the like - but then Newtown Connecticut happened, and nothing could be said.

Of course, we could say that anytime. There are atrocities happening daily in Syria, in every country, in houses in our suburbs.

What is the point?

I don't know. Or I think I do. The point is just to live, to go on as best we all can, bring up our children and nurture our relationships and families. Because we don't know how long we have them, and however long it is, is a gift and the meaning of life.


In the meantime, over the last few days and into the next few, I am taking my own advice: 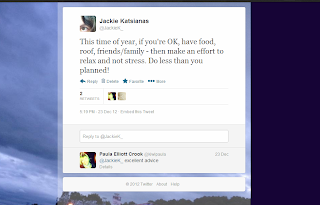 Merry Christmas to you
x

Moderation, Truth and the Middle

What are the wisest and most useful words in the history of human thought?

"Moderation in all things"


Not only is this known by everyone to be absolutely true, many other philosophies and much of what we believe can also be summed up by this one.

It not only applies to the best way to live a life (not too much of anything, nor too little), but it can be applied to ways of thinking, and what to believe.

My own philosophy is:

The truth is (almost) never at the extremes.

See? "almost never", not "never". Because never is an extreme. And sometimes, occasionally, an extreme position is the truth. But... not often.

Most people mistrust extremism of any kind - and rightly too.  Most of us tread a middle path, taking what we need or what seems true and uncomfortable with the bits on the edges.

It helps with critical thinking. When you read the latest statistics or PR from a lobby group in the news, or hear about some "new" theory from an "alternative" source, consider: how extreme is the position? Because those extreme positions are unlikely to be the truth.


As boring as it may sound, the truth, and the best way of being, is usually somewhere in the middle of things.

So that's my life (and maybe yours too?) in the middle.

Oh, and for those who believe in these things*, I'm a Libran.

What about you - are you a "middle path" person?
Or do you prefer life on the fringes?


Well, we had a good run. The last time the girls had head lice was in daycare about 4 years ago.

There are head lice going around at school at the moment, and all the kids have been inspected. Mine were both cleared, and I've been checking their heads for the past week, and it looked like we were OK.

Then A started complaining of an itchy head, so I checked again. Nothing.


A's reaction when I told her the reason for her itchy scalp: 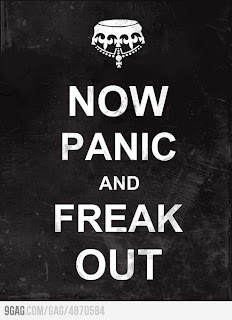 Me fearing Y's reaction when I told him the next morning:

I had no lice treatment at home, because we hadn't had lice in 4 years. I looked up The Internet for home remedies then smothered A's head in olive oil followed by yoghurt, knowing it was doing BUBKUS.

She rubbed yoghurt into my hair as my own head was feeling quite itchy by now.

We had showers, combed our hair and moved M's hairbrush into her bedroom away from ours.

M forbade either of us to cuddle or kiss her or get within a foot of her.


And today, A and I are home, with a bag of reassuringly chemical-filled lice shampoo and defense spray, and Grandma is coming round to keep us company.