March of the dinosaurs 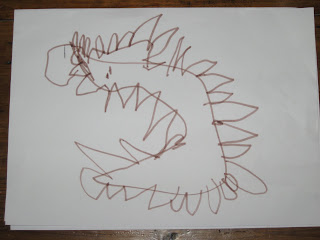 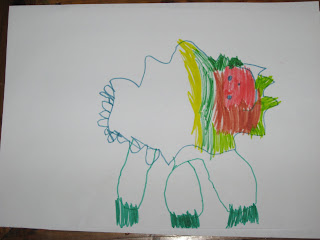 As George Bush apparently said once, "They misunderestimated me."
Never under-estimate your kids. Something I do all the time. I don't seem to learn!
These pictures are actually very old - something I've been meaning to post for some time, and time, time, time, time, TIME is the leading theme always. It just gets away.
Anyway, this was a few months ago, when the girls had just turned 4.
Now I love my kids and they amaze me every day (blah blah blah), but I know I don't have an Aelita Andree on my hands! (or maybe I do - there I go with the underestimating again). So at this stage, around 3 and a half, they were drawing occasional recognisable shapes but nothing regular. A spider here, a ladder there, some crazy squiggles most of the time.
Then on this day out of the blue M came up with this - first picture above right.
What...?!! NO hint that this was coming, you understand. Just a few wobbly flowers (still her favourite motif 4 months later), and no actual other lizardy-dinosaur pictures before or since. Where did this come from?!
Wide-eyed with awe, voice full of admiration, A cried "Mummy! Look what M did - a dinosaur!"
Then, her competitive button pushed, A promptly produced her own - the second picture above right.
Same story - nothing similar before or since.
Weird! Great but weird!
Lucky I took these shots too because by the end of the day they had both cut up their pictures and they now exist only as paper fossils somewhere in the recycling system.
Posted by Jackie K No comments: