Not to brag or anything, but in the 1980s I had perfect hair.

My hair is brown and wavy/curly and thick, and it just wants to grow OUT rather than down, so in its natural state it is like a messy, bouffy oval that reaches its widest point a few centimetres out from each ear, and sits just below shoulder-length.

As a child in the 70s, I wished I could replace my Shirley Temple curls with long straight hair and a fringe, but in the 80s my hair was excellent. I cut it short a couple of times, but mostly I wore it thick and shoulder-length, brushed to make it as soft and fuzzy as possible (like the novels I remember from that time that described the heroine's hair as like a 'soft cloud around her head' - that was a good thing. No anxiety over frizzy hair back then).

The hair goal of all teenage girls back then was this:

The epitome of female beauty to me was Kathleen Turner in Romancing the Stone. Who I loved because she had hair just like mine. (And also my sunburned red nose, but that's where the similarity ended). 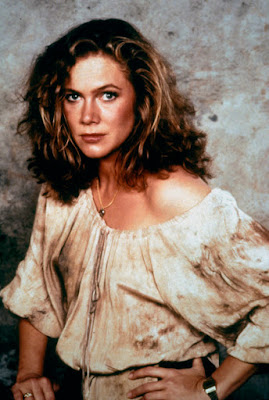 Alas, by the late nineties the tide had turned against thick curly hair. Even Julia Roberts and Cindy Crawford started straightening their hair.

My hair has always been difficult to straighten. Even when a hairdresser straightens it, it will start to kink by the time I get home, and by the next morning it's back to its messy, wavy self.

I came late to hair-straightening and never fully committed. Unless I wanted to stand in front of the bathroom mirror for an hour and a half with aching forearms, my hair sizzling and steaming under the irons in small sections at a time, and repeat this process every single morning, I was never going to achieve straight hair. I came to a compromise of running the straightening iron through sections around the front and the top and leaving the rest as is, which worked well enough.

But once I had kids and discovered the preciousness and rarity of free time, I lost all interest in spending even twenty minutes of it straightening my hair. It was the mid-2000s and my hair was definitely not correct.

That was a difficult decade for me, obviously.


Now, in my mid-forties in the mid-2010s, I am back to (mostly) loving my hair.  The aspirational hair texture these days is "bendy".  Bendy hair is shoulder-length or longer, often brown, and is supposed to look like soft, natural kink as if your hair does this naturally (but of course it doesn't)

You are supposed to secretly spend lots of time and dollars on conditioner and bendy rollers and curling irons to create this look, but here is how you can achieve it with next to no effort if you have my hair:

When men piss me off with their art

This is a ranty post. It's also not entirely serious, but it is a little bit serious, because the things I mention really did/do annoy me, though probably not all to the degree I'm presenting them here. I'm exaggerating a little to make my point.  It's just for fun :)

When men piss me off with their art


You won't get any argument from me that most great artists are men. You will get an argument from me if you try and say that's because men are better than women at art, but that's another story.

Anyway, as there is so much great art, high and low, produced by so many talented men, I have been a big fan of a number of talented men all my life. And when you're a huge fan of someone with huge talent, it is easy to assume that that person is also a wonderful human being who you would personally like and admire in the flesh, and that they generally see the world the same way you do, because after all, don't you both agree on what makes awesome art??

So it is a shock when these artists disappoint you. You might find out they might not be nice people (Terence Howard - you disappointed me greatly, sir). Or, as is equally jarring, an artist you love suddenly produces something that pisses you off!


I LOVE Gordon Lightfoot. If there is a better slow sultry country song than Sundown then I haven't heard it. I love Early Morning Rain, If You Could Read My Mind, Carefree Highway....

Carefree Highway. I do love it, but it also never fails to piss me off a little. Take a listen:

What's it about? A guy who is down on his luck, lost (possibly because his girlfriend left him, or perhaps that was some time ago), not knowing what to do. And what does he do? Takes off. Hits the highway, as he's done before. Sure, run away from your problems! It's not like anyone else ever has the same impulse, is it? Nice to be able to just throw everything away, pack your bag and take off when things get hard!

In my even less charitable moments, I think, what a GUY thing to do!  A bit like:


Got a wife and kids in Baltimore, Jack
I went out for a ride and I never came back...


For years, Paul Theroux was my favourite writer. I read most of his books in my teens and early twenties, and I didn't mind that he was arrogant and grumpy. At least not until The Happy Isles of Oceania, when he was finally too grumpy even for me. Plus I was a bit offended when he referred to a bloody sanitary pad on a beach as "that disgusting thing" - I mean sure, it was disgusting that it was there on a beach, I get it - but there was something about the way he phrased it that was a bit... anti-women? It seemed?

It may well be wrong or unfair, but sometimes it feels like you read something that shows a true glimpse of the writer's feelings or character.

Here's the main thing I remember, from all my hours and hours of reading Paul Theroux. Hours and hours, and books and books, and this is what has stuck with me:

This is from My Other Life, which was a weird experiment that annoyed me a bit in itself, even while it was a great read. There is a chapter where Paul Theroux (or possibly a fictional character! He won't say which!) has invited people for dinner and is forced to cook and organise everything himself because his wife, tired from her day at work and under some kind of unnamed stress, is angry with him and refuses to help with any of it, saying repeatedly "It's your dinner."

The thing is, even young as I was when I read this, and even being a massive Paul Theroux fan, I totally got his wife's point of view in this, without any more context from Paul Theroux. In this one incident, in which he imagines he portrays himself as the injured party, he instead unwittingly outs himself as a probable bastard who routinely expected a lot from his wife with little reciprocation or notice. She was busy from work, tired and stressed out, and was angry at him for a lifetime of precisely this kind of shit. A lifetime of watching him swan off to travel and write memoirs which included boastful hints of affairs or at least flirtations, and her at home to raise the kids plus keep her own career going, and then also have to entertain his last-minute mid-week dinner guests when he was back home?

Fuck off Paul, it's your dinner!

AND WHAT'S MORE: After enduring the unreasonable and unfathomable reaction from his wife, Paul Theroux (or, okay, the fictional character), happily and competently makes the dinner. He prepares a pot of curry on the stove - taking care to describe the deft and relaxed way in which he prepares it, as counterpoint to his wife's unreasonable stress - then ducks out to the shops to buy whiskey for his guests while it cooks, because his wife wouldn't go and get it.  As he walks, he passes the local pub and "wished that I could be sitting there irresponsibly reading the evening paper over a pint of draft Guinness."

Oh. My. God. I do believe this is the part that actually irritated me the most. This whole section is meant to convey how relaxed and competent he is in the kitchen and at life, but in that one sentence he conveys his sudden pique at having to do all this himself when he really, obviously, didn't think he should have to.  What an asshole.


As a teenager I discovered my parents' Cat Stevens albums, and fell for them hard. I LOVED Cat Stevens. I taped Teaser and the Firecat and Tea for the Tillerman and listened to them for years. I loved the beautiful melody in the song Wild World but it also has always pissed me off.  As a kid I had been confused by the way men seemed to sing romantic songs to girl-children ("little girl"). It took me ages to understand that the "little girls" in songs were actually grown-up girlfriends. As I got older it just started to really annoy me. I didn't know the word "infantilising" but I knew that's what it was. It was always either really patronising or really creepy and sometimes, as in Wild World, it managed to be both.

In Wild World, the singer's character is upset that his girlfriend is leaving him, and he is begging her to reconsider. We all have contradictory feelings in anger and the song is well written: the character veers between grief, despair, concern for his girlfriend and flashes of anger ("I hope you have a lot of nice things to wear"). But it is super patronising, and gives the girlfriend no credit for having any intelligence at all. It refuses to believe she has any good reason for leaving him. I mean I know it's just a "story", in character, and it's about feelings, but it just always really irked me. It is absolute proof that the girlfriend was making the right decision. You run far, girl, and don't look back!


You know I've seen a lot of what the world can doAnd it's breakin' my heart in twoBecause I never wanna see you sad, girlDon't be a bad girlBut if you wanna leave, take good careI hope you make a lot of nice friends out thereBut just remember there's a lot of bad and beware


While I was looking for an image I could use for this post using search terms "angry woman" I came across this Jim Carrey quote/meme, and it pissed me off!