Yesterday here in Melbourne town we had some very wild windy weather. Winds up to 140km/hr hit much of the state causing havoc.


In my house some havoc reigned as well, albeit not as serious as those houses which suffered damage- not to make light of that by any means. The kids were unsettled all day, and a little freaked out at night-time when the winds picked up and we put the dog outside. M was frightened poor Harry would "get blown away", and while I assured her that could never happen, it did give me pause for our fluffy little guy for a moment.

Today I noticed this post from No Excuses! which grabbed my attention thusly:

"When ever there is gale forced winds, children (and animals too) tend to play up big time. They are rowdy, psycho, loud, full of energy and just constantly on the go (more so than normal).  To sum it up in one word they are WILD."


This reminded me that my cousin - who has had kids a bit longer than me and is a wise and practical mum - has always said the same thing, that kids turn rowdy in windy weather. And that, subsequent to her pointing it out, I had noticed the same thing myself. At least I think I have.


Intrigued, I hit Google with "kids behaviour and windy weather" and found quite a bit:


So what to think, what to think? Is this a real thing? Or is it a myth, as most serious studies infer is the belief that the full moon influences behavior? (I know many, many people swear it does, but I admit I am not a believer on this one).

Does it sit in myth-busted but much contested territory like the idea that sugar causes kids to be hyperactive?

I am conflicted on some of these beliefs. On the one hand as a respecter of science, I'm not keen to argue with empirical evidence, and you have to listen when multiple studies show no valid causation link. On the other hand, it irks me when the real-world, long-term and consistent experience of mothers and teachers is dismissed out of hand because someone can't replicate it in a lab. That, I believe, happens a little too often.

Well first, let me look to my own behaviour. There's wind and there's wind. Cold, blustery, rainy windy weather is not my thing, and it does not affect me, other than make me cold and annoyed. But I love hot dry windy days (though I know they're a fire hazard), and I do perk up and feel outdoorsy and energetic in them. As a teenager I remember my sister comparing me to our red setter on a windy day - which was flattering, as you can imagine. But I'll admit the comparison was fair.

So I relate to the Best Answer poster in Yahoo Answers and also to the poster on the ABC Science thread who wrote "I'm like a pixie on speed on a windy day".

What about my kids? Well, yesterday on our gusty Melbourne day my kids were a handful, but can I blame the wild windy weather?

A lot had gone on in our house of late. In the last 3 months, the kids have been on an overseas odyssey, I've broken my arm, our work and school routines have changed, and the kids have experienced some of the usual but upsetting schoolyard dramas that inhabit the world of girls.

This past week I had an operation to pin my arm and then was sick. Yesterday was my first day back working (from home thankfully), and it coincided with the Victorian teachers' strike which meant the kids were home too. My mother was on hand to manage the kids so I could work, but it was a strange day. The kids were unsettled and were not used to having me up and about. I had just resurfaced from a weird lost week that began with an operation and two days of drugged-out (blissful) recovery, followed by 3 days of illness, which took me out of our family's action for 6 strange, bedridden days.  The upheaval to our family life had left all of us tired and unsettled.

So... we are a long way from a controlled experiment into the weather's impact on kids' behaviour at my place.  But I'm not ruling it out. 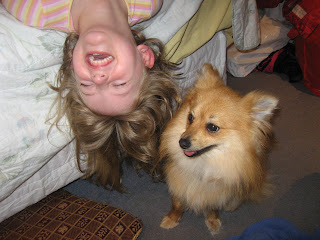 What about you? Does the wind affect you or your kids? Tell me a story!