As Julian Burnside tweeted this week:

I am an atheist, and I LOVE science. But I am not anti-religion. Religion is part of who we are as humans, and it serves multiple purposes. Religious people are probably on the whole happier, and more comforted. And we all, somewhere, retain a little bit of religious sentiment, hope or belief, even if we consciously reject it.

My kids were baptized Greek Orthodox, but we don't go to church. They opt in to religious instruction in school, though I would prefer it were not offered. I don't send them to learn ethics or how to be a good person, because you don't need religion for that. I send them because it's a huge part of human culture and society, and because religion gave me some comfort as a child. (Actually I took A out last year, because she hated it. M loves it. A wants to try again this year because her friends go, so we'll see how it goes. I've made it clear she doesn't have to go).


Like the books on this trestle table, why can't we all just get along? 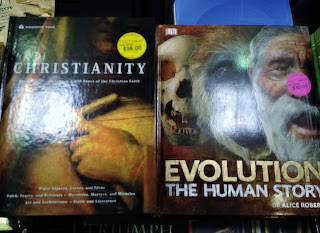