The Olympics ended and I was sad...

The Olympics are over. Who else felt a little sad and lost on Monday?

I'm not a sports lover. At all. One of the happiest moments in my life was my last day of high school when I knew I would never again have to participate in organised sport.

But I love the Olympics. There is something so transcendent about them - something that rises not only above everyday sport but also above the kitsch and glitz of the ceremonies, the appalling economic costs and our casual, sniggering cynicism.


I skipped the Opening and Closing Ceremonies. They go on forever, they are cheesy and a little boring, and they make you uncomfortably aware of the astronomical cost involved in the whole endeavor.

I do like the opening ceremony where the athletes walk out with their flags and their varied uniforms, even with the realization that you (okay, I) can't locate half * of these countries on a map.

But it's great when the opening ceremony is over and the Games get underway. I ignored the inevitable Hunger Games quips on Twitter and settled in.  I was in luck too - thanks to my broken arm (healing but still sore) I'm still sleeping half-propped-up on the couch in the lounge, which gave me all-night access to the TV.


There are the usual complaints about broadcasting decisions. We only see Australian stuff in full, Channel 9 cuts and zips too often, we don't get to see all points awarded or medals bestowed. Every time I turn on the TV I seem to see basketball. How does that happen? But what can any broadcaster do? There are too many events playing simultaneously and too many competing audience preferences - you'd never please everyone.

There is the national shock at not "punching above our weight" in the medal tally. Australia, coming down abruptly from the high of Sydney-Athens-Beijing, did not win gold in the numbers expected and most of the media did not hide their disappointment. We did worse than "Team GB", worse than France, Italy or Hungary, and for a worryingly long time we did worse than New Zealand (the horror), and Kazakhstan. Thinking about this it struck me as quite likely that countries which host a Games do very well over an 8-year period leading up to and following the Games they host, as money and effort pours in and the weight of cultural support surrounds the Olympic endeavour; and in fact, this is the prevailing theory.  Last Saturday the Fairfax papers published a startling feature highlighting the cost per medal of the Olympics and the limited value in hunting gold given the cyclical nature of success.

The worst moment around this for me was the TV poolside interview with James Magnussen after he won silver in the men's 100m freestyle final, trailing American Nathan Adrian by one one-hundredth of a second. The interviewer called it "the cruellest of losses", and asked Magnussen "If there's anything you could change about your preparation now in hindsight, what would it be?" He finished, if I remember correctly, with something like "but never mind, you haven't let anyone down".

Similarly shocking was Emily Seebohm crying after winning silver in the 100m backstroke, sobbing that she had "let everyone down." (Pressure, much? You didn't let down anyone, my love. You won a medal! An Olympic silver medal!)

I do get this. I get that to be an Olympic athlete you must be hungry for gold. I get that everyone wants gold and that when an athlete has their hopes (and expectations) on winning gold, then silver is a disappointment. But that disappointment should be slight, and momentary, and not in any way encouraged by the media - because any Olympic medal in any color is an amazingly awesome and rare achievement. 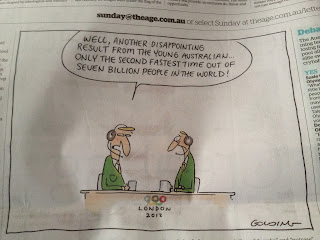 
One of my favorite moments was one Day 1, when the Australian women's team won gold in the 400m swimming relay. The women's team spirit and gracious, friendly faces were beautiful:

There was so much that was amazing: Sally Pearson's 100m hurdles gold, Mitchell Watt's silver in the long jump, Usain Bolt in everything. "Inspiring" (hate that word, but it's valid) stories for me were 19 year old Australian Stephen Solomon's cheerful last place in the men's 400m, 16 year old "schoolgirl" Brittany Broben's silver medal for diving and 16 year old Ye Schiwen's two gold medals, in their first Olympics.


My eyes popped watching the men's long jump this year, where nearly every finalist jumped more than eight metres. EIGHT METRES. Without any kind of machine to do it. Do you have any idea how far that is? If you are not sure, try and jump ONE metre. I didn't even try - I know I can't do it.

And what about Usain Bolt?

The man is a miracle. From his heats where he (seemingly) casually jogged across the finish line, to his  spectacular 200m sprint gold win, he epitomised everything people love about the Olympic games.


Why the Olympics are great

The New York Times has published an interesting graphic of a men's 100 metre race between every Olympic medalist of that event ever, showing how far ahead of everyone else (this year's) Usain Bolt is.  It's a startling illustration of one of the fascinations of the Games: even discounting for the drug scandals, athletes keep getting faster, stronger, better.

That's what makes the Games so compelling (and I suppose all elite sport). It's the sight of the few embodying what humanity can do. Not only are we watching the pinnacle of pure human ability, we are also witnessing the comforting proof that human ability, endurance and excellence can improve, again and again and again, seemingly (but surely not) forever.

One of my favourite comments - without cynicism - on the value and meaning of the Olympics:

umair haqueVerified‏@umairh
So maybe, despite all our richly deserved cynicism, the Olympics do retain the spirit of accomplishment--and how it betters us.


So the Olympics are over. What now? The Paralympics of course, and then, in just two years...

How are you on the Olympics? Love, Hate or Meh?